Mary began her legal practice in 1999 after a successful career as a nurse and nurse manager at Saint Mary of Nazareth Hospital in Chicago, Illinois. Mary initially began her practice concentrating solely in family law, but soon expanded her practice to include personal injury and real estate matters in order to meet the needs of the community. Mary has extensive trial experience and has a reputation for being an effective advocate for her clients. 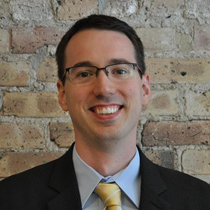 Michael J. Pyrchalla holds a History degree from Lewis University (2001) and a Juris Doctor from The John Marshall Law School (2005). He was admitted to the Illinois Bar and the United State District Court for the Northern District of Illinois in 2005. Michael is also a member of the Illinois State Bar Association. Michael worked with his mother, Mary A. Lopez, as her law clerk and paralegal for three years prior to joining her as partner in 2005. Michael has helped Mary expand their office with his passion for helping his clients and getting results for his clients. Michael is respected by both his peers and his clients as an effective advocate.